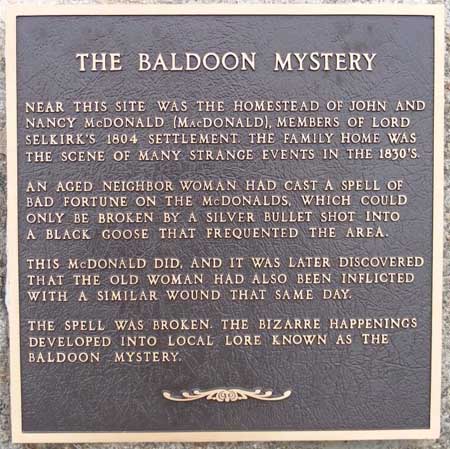 I have been interested in the events known as the Baldoon Mystery for a long time, and while I admit that elements of the story definitely have the ring of a good folktale, I cannot dismiss the sheer number of witnesses and the volume of good documentation, which suggests that something, perhaps not of this world, did occur in this tiny Scottish settlement through the years of 1829 to 1831.

What was once the community of Baldoon is located in south western Ontario near Chatham. It was founded in 1804 by Lord Selkirk, and it’s eventual failure is what prompted him to sponsor Scottish colonization of the western prairies. All that remains today is a plaque, which commemorates the site, but makes no mention of the seemingly supernatural events that would make it infamous among Canadian paranormalists. So well known would this story become that there was even a play written about the Baldoon Mystery entitled Baldoon by Governor-General award winning author James Reaney and Marty Gervais in the 1970’s.

Beginning in 1829 the residents of the Macdonald household in Baldoon were subjected to the appearance of a particularly rambunctious and frightening poltergeist. The farmhouse was pelted by stones, seemingly thrown by unseen hands, and hails of what appeared to be bullets. Their windows were smashed, water poured from the ceilings (with no known source), mysterious fires would break out, and the very foundation of the house felt as if it were being rocked.

The Macdonalds would awaken in the middle of the night to hear what sounded as if there were many men marching in the kitchen when no one else was in the house. Their baby’s cradle would shake violently and all manner of soap and sundry would fly around the room as if by their own volition. These events of course terrified the young family and all those that happened by and chanced to witness these strange events for themselves.

Scared, and quite frankly probably fed-up, the Macdonalds moved in with John Macdonald’s father in a house adjacent to their own. Promptly as if in retaliation for their leaving the family barn burnt to the ground.

The manifestations of poltergeist activity increased despite the change of residence.

At this point many neighbours and folks from surrounding areas had heard of the “troubles” facing the family in Baldoon. Curiosity seekers would regularly come and visit in the hopes of witnessing the poltergeist’s effects. The following is a series of eyewitness accounts to the mysterious happenings:

“At the time of this trouble, I lived about three quarters of a mile from the place and was present and saw for myself many of these strange things. Mr. Alex Brown, with the others, took a number of lead balls that came in through the window, marked them, tied them in a bag, and dropped them in to the centre of the Channel Ecarte, in about 36 feet of water, and in a short time the ball came back through the window. I was present when the barn was burned and also when a man by the name of Harmon was preaching there. At this time a large stone came right through the door, breaking out one of the panels, and rolled in front of the minister. The stone apparently had come out of the water. A search was made about the house, but no person could be seen. I also saw a loaf of bread move off the table and dance around the room. The owner of the house, John T. McDonald, I know to be a very respectable man.”

“I went with my father to see what was going on at Belledoon for I was very young at that time. We saw a pot rise from a hearth and chase a dog outside and all around the yard. It could not get away from the pot, for it would hit the dog and he would yell and howl with all his might. I saw an old fashioned butcher knife pass through a crowd of fifty men and strike into the wall the whole length of a ten-inch blade. This happened in 1830.”

“On returning from hunting, to my surprise, John T. McDonald’s house was all burned. There had been about thirty men there. The house was set on fire by unknown hands. I stopped there four days watching his father’s house, and I saw it set on fire a great many times, but we always had plenty of water on hand to put the fire out. I saw the balls which came through the windows and would tie them in a small bag, which was watched by about thirty men, and in a few minutes we would examine the bag, and to our surprise not a ball would be left in it. I also saw the lead that was taken out of the seine without a thread of the seine disturbed. The trouble was caused in this way – J.T. McDonald purchased a piece of land which the disturbers wanted to purchase and these are the steps they took to have revenge on him. I saw his corn and it did not grow more than a foot high that year, and his crops were all destroyed. We called them wild Indians in our language and we believe they made their abode in the prairie southeast of the house on the farm. We were aware of their doings and tried to tell him what we knew about them, but could not understand each other’s language. My age is now seventy-four years, which would leave me twenty-fours years at that time.”

The above quotes are courtesy of the Wallaceburg & District Museum

An exorcism was performed by a local preacher and it failed. An attempt at “clearing” the home by a would-be Michigan ghost-buster also resulted in failure, and prompted local authorities to charge Robert Baker with witchcraft. Mr. Baker was convicted and sentenced to one year of imprisonment. He appealed to the Lieutenant-Governor and was granted a pardon on May 6th 1830. Whatever became of this ghosthunter after his release goes unrecorded.

Convinced that his family had been cursed John Macdonald along with a Methodist minister by the name of McDorman travelled to Long Point to consult with a then famed witch hunter by the name of Dr. John F. Troyner. Dr. Troyner’s daughter (who was believed to possess the gift of second-sight) told Macdonald that she “saw” a long, low, log-house in which lived an old woman who wished to drive away his family. She went on to say that this woman had the power to transform herself into a goose and could only be stopped by a silver bullet. Macdonald believed he knew exactly whom this elderly woman was and admitted that a strange goose had recently joined his own flock.

As the story goes Macdonald then returned home, moulded a bullet of sterling silver, and in the presence of witnesses shot the wing of the goose. Macdonald and company then ventured to the suspected witch’s house and found the old woman in an agitated state nursing a broken arm.

The Baldoon Mystery seems to have ended here. No more poltergeist-like manifestations were reported and this strange tale passed into history.

As I stated in the opening paragraph some of the elements of this story sound much like folklore particularly in how the poltergeist events were eventually resolved. However, all of the folks involved in these events were actual people, including the would be “house clearer” and the witch hunter. Events were documented at the time they were occurring and not (as is often the case with myths and legends) presumably many years after the fact.

So the question remains – whom or what was haunting the Macdonalds and their farm? In all probability we will never know………