In August 2010 I was contacted by a lady who had a very interesting, and unusual experience to share. I’ll reprint her story and drawings below so you can see them and judge for yourself. 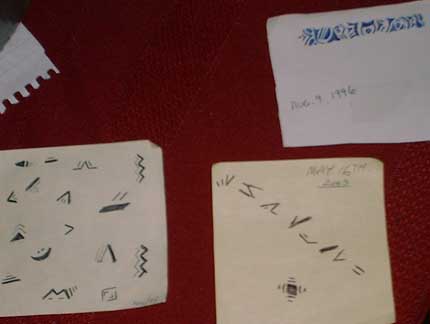 “My first experience was in November 1995. I was sitting at my desk at work. All of a sudden, in my upper left peripheral view in my left eye, a series of these symbols was visible in black characters, on a white shimmering background. They moved along so quickly (like a ticker tape) it was difficult to see any one figure clearly and this carried on for about 5 minutes. I was so shocked, I said “something is in my eye!”, then ran out of the room after viewing these for a few seconds. I wanted to find a secluded area to keep seeing them in privacy and give my full attention to it, so I went into the handicap washroom (a private room) and sat down to watch the rest of the show. I tried to write down some of the symbols but there were thousands. Some kept repeating (like a language) so I tried to capture what I could on that little post-it note. 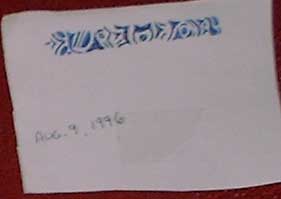 The following year, in August 1996, I was in the shower at my home when this phenomenon happened again, and again it was in the left upper peripheral of my left eye. This time it seemed more decorative and hovered in one place with a centre point of a dark spot with an archway around it (refer to post-it note). It too lasted for several minutes and I wrote down as much as I could when I came out of the shower. In December of the same year, it happened again at home when I was sitting on the couch watching TV. This time there were more tiny lines in a row accompanying the symbols. 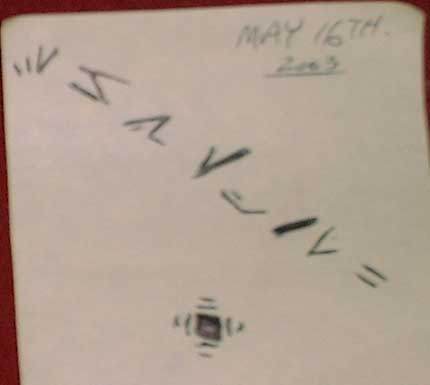 There was a long gap in time until I saw it again in 2003, again, I was in my office at work. It was more in the centre of my eyeball (left) for the first time, but there were significant symbols just hovering in my vision, so I wrote some of them down. I was feeling frustrated and thought, what is this? I don’t understand? why don’t you just go away? I haven’t seen anything since, but you can imagine my curiosity. It felt like someone was trying to communicate, but what good is it if I can’t understand? I have tried to look in books, and on internet, etc. to no avail. 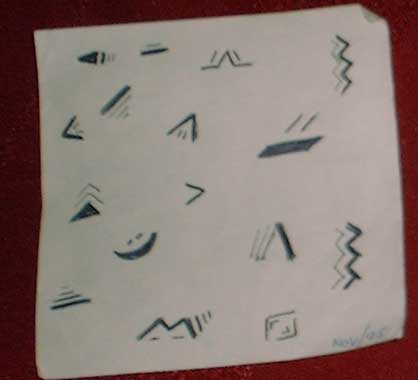 Well, I hope this information is of some help to you. You are my last hope in figuring this out.”

I originally published this lady’s experience to the Paranormal Studies and Inquiry website, and was contacted by various people thinking this was migraine related.  I asked the experiencer her thoughts on this and she did not agree. I have also suffered migraine with aura most of my adult life and while I can see why people believe this might be an answer I tend to agree with the witness. My thanks and appreciation goes out to her for confiding her experience to me.

The symbols in her drawings remind me of Heinrich Cornelius Agrippa’s Celestial alphabet.  The script was first published in his third book Of Occult Philosophy and was designed in order to communicate with heavenly spirits. 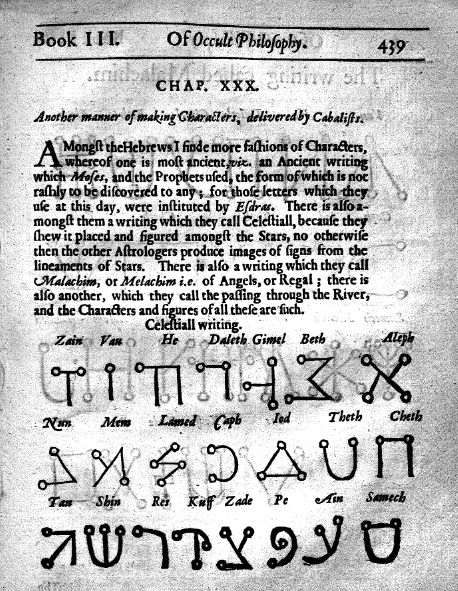 In the years since the experiencer first contacted me I’ve come across many examples of similar strange symbols appearing to UFO contactees most notably in the research conducted by Mario Pazzaglini.

Clinical psychologist Dr. Mario Pazzaglini whose background was in clinical psychology and neurophysiology published a book entitled Symbolic Messages. The above image was taken from his examples.

Example of a cursive script from a 1992 Contactee.

“I received this in my mind after my first contact” (CE II ).

“It’s both technical and religious… how to manipulate minerals and light.”

An interview with Dr Mario Pazzaglini was published by the Anomalist in 1994 click here and offers many more examples of symbolic messages throughout human history.

Much of his work reminds me of the 2016 movie Arrival.

6 thoughts on “Have You Seen These Symbols?”